What to Know About This Year’s Historic Legislative Session 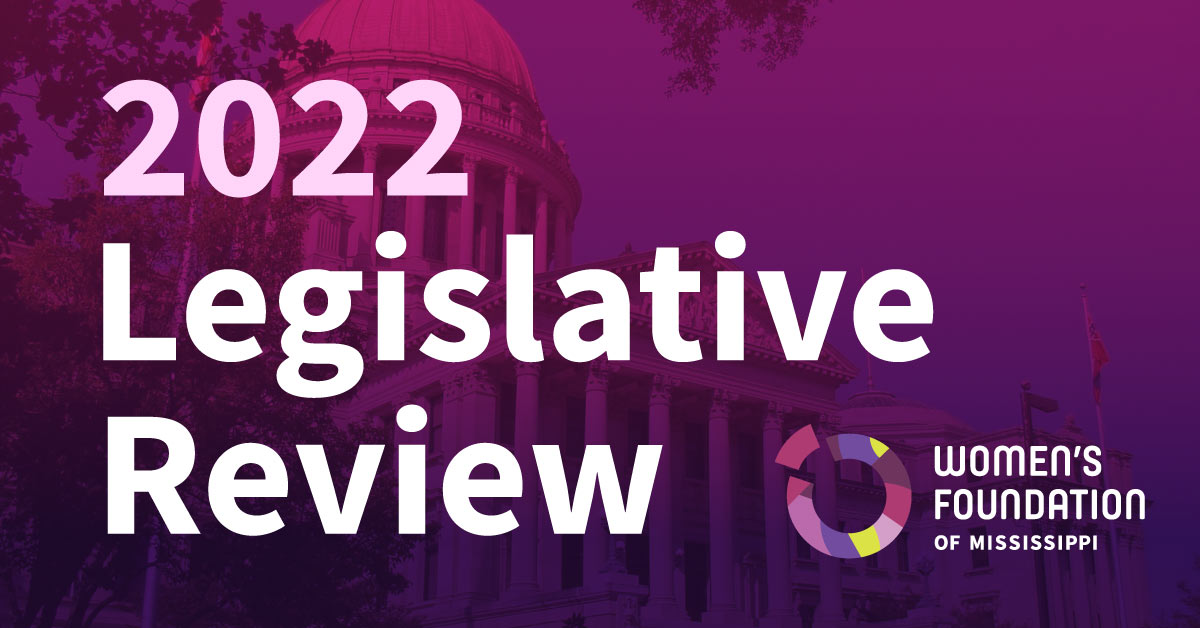 As the 2022 Mississippi Legislative Session draws to a close, let’s take a look at how new legislation will impact women across the state. Listed below are a few bills, some approved and others not approved by legislators, that influence key systems affecting women.

Medicaid is an essential resource for many Mississippi families, with nearly a quarter of the state’s population enrolled, and the same is true for new mothers. In 2020, 60% of births in Mississippi were financed by Medicaid, according to Kaiser Family Foundation. Women who are enrolled in Medicaid are more likely to have comorbidities, making their access to healthcare all the more necessary.

Improving mothers’ access to healthcare will also help lower Mississippi’s rates of pregnancy-related mortality, which are nearly double the national average and which usually occur postpartum. According to research from The Mississippi State Department of Health (MSDH), between 2013 and 2016 86% of pregnancy-related deaths occurred postpartum, with 37% of those deaths occurring 6 weeks after childbirth. Cardiomyopathy, infection, and hemorrhaging are the main causes of postpartum mortality, and are all preventable with proper health screenings and treatment.

It is paramount that women have access to postpartum maternal care not only to ensure that they have a healthy transition into motherhood, but also to ensure the optimal health of their children and families.

House Bill 530, or the START Act was signed into law on March 30 and includes an almost $250 million plan to increase wages for teachers and assistant teachers at the start of the 2022-2023 school year.

In Mississippi, nearly 80 percent of educators are female. This bill will provide essential additional funding for women educators, and will also help the state retain teachers who may be tempted to move to states that offer higher starting salaries.

House Bill 770, or the Mississippi Equal Pay for Equal Work Act, is currently in conference and will require employers to provide equal pay for equal work and will provide legal recourse for employees being paid more or less than their coworkers of the opposite sex. If signed, it will be Mississippi’s first equal pay law.

House Bill 531, or the Mississippi Tax Freedom Act of 2022, is currently in conference and will result in a $100 million cut in personal income tax every year until it is eliminated entirely after six years. If the bill is signed, Mississippi would become the tenth state in the nation to not tax its residents’ income.

The bill will increase state sale’s tax from 7% to 8.5%, in order to offset the drop in income tax revenue, and will also increase taxpayer exemptions. Mississippi earns 34% of its state revenue from income tax. Earning that revenue back through increasing the state’s sale tax may only widen the wealth gap in the state.

Stay in the Know

Check out these resources and stay up to date on the latest legislation: